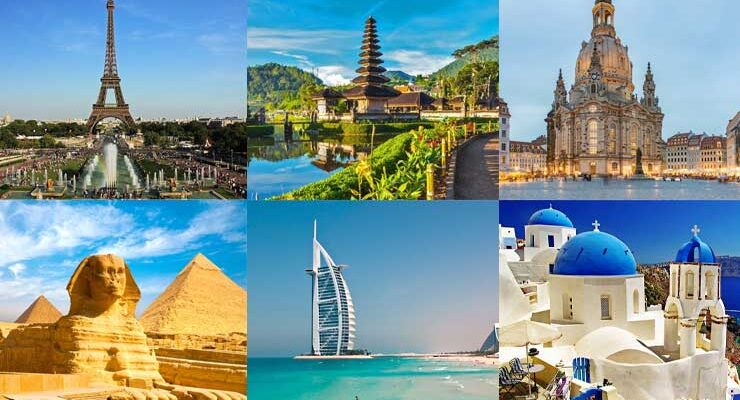 Everyone has his favorite spot that lingers in his memory long after he has arrived home. The everlasting memories of his loving spot brush up his mood with a grin on his face. The world is replete with countless wondrous hidden gems that await the human eye to find and explore. So the answer to this question Where do we want to travel? then surely is “Where don’t we?

So singling out the World’s Top Holiday Destinations mainly depends upon the press releases, tourism statistics and overflowing spreadsheets of hotel openings and restaurant debuts and new flight routes prior to deciding for vacations. We also consider various travel narratives like Where our friends have had their overwhelming touristy time? What vacation destinations we are watching on our Instagram, Facebook or YouTube and Which places are the unavoidable part of Must-Travel Spots list nowadays?

According to the aforementioned facts, there are some of the must-visit vacationing places/ spots you must consider in your wish or bucket list to refresh your body mind and soul.

Thereare some spectacular visiting spots that have been visited by various International Tourists. These are the countries whose travel stories are seen sprawled over social media. Some of these countries are also registered by the World Tourism Organization ( UNWTO). These are as follows :

It’s no surprise that France has topped the charts many times. Its capital city Paris is the most sought after city which is inscribed in the travel diary of every tourist. It encapsulates various eye-catching visiting sites from Eifel Tower in Paris to the castles of Loire Valley and wineries in Bordeaux. Apart from its bustling city life, its rural territories are really impressive particularly the Alsace region of France, with its villages of brightly-painted steep-roofed and half-timbered housesThe region’s capital, Strasbourg, is a lovely medley of fairy-tale cottages, cobblestoned alleys and gingerbread houses. Paris is also known as the “City of Lights”. You can also visit the Vineyards of Bordeaux, a port city in South-western France and taste wine at the famous wine region.

Thailand is among the most influential traveling countries to visit in Southeast Asia. In 2018, it has been eyed by 3.5 million travelers across the globe. It is the home of some of the best beaches in Southeast Asia. Besides having fantabulous beach breaks, you can have a delish Thai food and have fun at the Buddhist temples and palaces that are the treasure troves of history. Thailand is indeed a popular stop for the history buffs and photography enthusiasts. It is also called the “Land of Smiles “

This spectacular country is also a proud part of the UNWTO’s tourism ranking list. Located in the heart of Europe, it is worthy of spending money onthe touristy purpose. Many of the major German cities are the magnet for visitors across the globe. It is famously recognized for its festive Christmas markets, beer festivals and summer events. It is the world’s largest Volksfest with six million visitors from around the world. In 16 to 18 days from mid-September until the beginning of October large quantities of beer are consumed.  Moreover, if you are a football lover than excite yourself with enormous football stadiums and behold huge cheering crowds. Football is the national sport of the country with one of the best football teams in the world. Germany is also a home of 25,000 castles, ruins and ground monuments. These breath-taking German castles are distributed throughout the country.

There is no traveler in this world who is not acquainted with the beauty of Italy. It is the favorite city of many travel geeks. Italy is the home of enchanted Italian Piazzas. These Piazzas or squares are the beating heart of every Italian city and town. These piazzas are crowned as some of the most beautiful places in Europe. Moreover, the Venice of Italy is an unmissable place of fun and panoramic view. It is also known as Floating City or the “City of Waters” where you can roam through unusual and exciting means like Boating and use the Vaporetto, which is a water bus. Moreover, this beautiful Italian city is also the possessor of an extremely prepossessing Piazza San Marco which is famously known as “the drawing room of Europe”. These piazzas remind the Italians about the Imperial rule of Rome and their productive activities in Italy. Besides this, this country provides the travelers with a diverse traveling experience – we can go from the coast to rustic olive groves, to dramatic mountains in one day.

Spanning acrossEurope and Asia, it is famous for its distinctively blended Euro-Asian culture. In 2014, it was ranked as the 6th most popular tourist destination in the world. It is an epitome of an ancient historical civilization. It is characterized by outstanding historical sites including the awe-Inspiring Roman ruins and Ottoman architecture. It is also a place brimmed with natural attractions from the inimitable cotton travertines ofPamukkale to the whimsical valleys of Cappadocia. It is famously known for its amazing cultural blends. Although it is seen as a Muslim country with Islamic culture, but this land is the home of thousands of Christian pilgrims as well. Because their Santa Clause was born in modern-day Turkey. So the characteristic Muslim-Christian cultural blends enable all the international tourists across the globe to have an immensely easy and joyful time in Turkey. Its largest city called Istanbul particularly attracts the world travelers with its blend of “East-meets-West and old-meets-new”
In Istanbul particularly, never miss a chance to amuse yourself with ecstatic dances and whirling Dervishes in different organized dance ceremonies. Moreover, the Turkish cuisines also include the Euro-Asian fusion of spices and ingredients with a unique presentation and superb taste.

Turkey’s Ankara like Istanbul is also a notable historic site. This city is the home of several museums of historical and architectural excellence. The Mausoleum of Ataturk ( Turkey’s founder) named Anıtkabiris also there in Ankara

In 2018, Spain was the second most visited country in the world. So there is no European visitor in the world who has not roamed this exciting country. Furthermore, the headquarters ofthe WTO are in Madrid. it is a delight for the photography geeks and adventurers. You cannot return without impressing from the photographic view of sunlight playing endlessly off the “scales” of Gehry’s Guggenheim Museum and the throbbing street life of La Rambla and Plaza Mayor. It is a city brimmed with marvelous buildings, towers, walls, gardens, and mosque. These constructions are a symbol of artistic and architectural excellence. It must be noted that Spain is the world’s second country with the most World Heritage Cities or the country with Blue Flag Beaches in the entire Northern Hemisphere.

Moreover, From the ancient monuments left by the Romans and Moors, the medieval castles of the interior, the white villages in inland Andalucía or the vibrant cities of Barcelona and Madrid there is a great mixture of cultural attractions in Spain.

The country generates a great revenue from the income of tourism. Undoubtedly Greece has always been an apple of eye for the artists, painters, and dramatists across the globe. In Europe, it has been a major tourist attraction for its rich culture and history. It encloses spectacular and scenic cities like its capital city Athens, Santorini, Mykonos Rhodes, Corfu, Crete and Chalkidice are some of the country’s major tourist destinationsthat magnetically appeal the tourists from the around the world.

Moreover, Greece is the parent of the Drama genre. The theatric dramas all over the world, whether organized in-door or outdoor, is evolved in Greece. The theatre or Drama held a venerated place among Greeks.

Tourist Attractions of Africa and the Middle East

If you are a travel geek, then explore an inimitable African continent replete with time-honored attractions. You would surely be amazed by the distinct charismatic African culture. The following African countries must be bucket-listed for sure.

Egypt is Africa’s leading tourist attraction that has eased its visa for almost all the European and North-American countries. It is an all-famous home of Pharaohs, temples and tombs. It is a treat for the learners of Islamic history and civilization. It is the bearer of the last surviving of the Seven Wonders of the Ancient World, the “Pyramids of Giza” It is the magnet for the archeologists and awed the travels across the globe. The Egypt’s capital Cairo is home of madrassas (Islamic schools of learning, mosques and monuments. In this city, you will also find the labyrinth souk of Khan el-Khalili where the coppersmiths and shopkeepers are seen with their tiny workshops laden with ceramics, textiles, spice, and perfume. This city is the hub of preserved Islamic architecture of artistic excellence. To explore this hub, visit Al-Azhar Mosque and the dazzling Sultan Hassan Mosque, and behold the minaret-speckled panoramas from the rooftop of an ancient medieval gate of Bab Zuweila.

It is one of the safest countries of Africa. It is a welcoming African abode for all the tourists across the globe. It is the possessor of scintillating Souks, placating beaches and soothing Hammams. It stuns the history geeks with its amazing Kasbahs and forts. This African wonder also owns a revered place in the history of Media and Cinema. Morocco has the world’s largest studios named the Atlas studios. This studio is the home of the world-famous HBO series named “the Game of Thrones”. Moreover, the ancient medinas of Fez, Essaouira, Meknes, Tetouan and Marrakech would be crowned as Africa’s first Capital of Culture in 2021 in celebration of its rich heritage. You can escape from these bustling places in Berber Mountain villages and far-flung desert outposts.

The middle East region is composed of 14 different countries that are distinct from one another with their own separate features. Among all the countries the United Arab Emirates is the most visited attraction.

It is the city and Emirate in the United Arab Emirates that is known for Luxury Shopping Malls, ultramodern architecture, and a lively nightlife scenario. It is also loved by international business travelers and visitors around the world for its larger- than life attractions including the BurjKhalifa, the Dubai Mall and the indoor Ski Dubai

This middle-eastern country is characterized by the vertiginous cliffs, turquoise blue waters and empty epic beaches which are still called to discover. If you are wild, energetic and adventurous, this sporty place must not be missed.

It is undoubtedly the most sacred abode for the Muslims in every nook and corner of the world. The Muslims step into this prepossessing territory for their spiritual pilgrimages named Haj and Umrah. However, Saudi Arabia is filled with ancient and historical places that every travel must behold