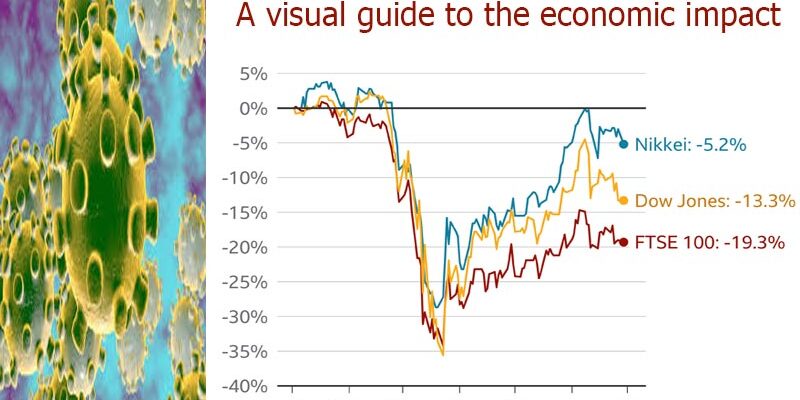 As everyone knows that our world is going through the pandemic situation since December of 2019. The virus name Corona has first detected in China and with a blink of an eye, it is all over the world. Infection millions and taking the lives of thousands, this virus has no end yet.

However, through all this situation world has witnessed the international economy grind to halt because many countries imposed the lockdown in their regions to control its spread. This virus, which has no vaccine or drug to cure, has not affected peoples’ health only, it also has brought their economy and business down.

This virus has brought many businesses down and many emerging markets to halt. People have gone into severe depression, as no one has ever seen or witnessed this situation. People are clueless, how to deal with this pandemic. This disease does not make people weak physically only, but also emotionally and financially too.

The impact of COVID on the world’s economy: This virus has hit the economy of many countries. Most states’ economy has, unfortunately, plunge into recession this year, especially those countries whose market and the economy is not stable and considered emerging ones. Their health care system has collapsed, they have lost the economy generated from tourism, as flights got banned due to the outbreak spread of the virus, the delay in payments downcast the capital flows, and not to forget the loan these countries have taken from IMF. Export industries have also got hit badly by this virus.

Due to this virus, the stock market has been crushed and oil prices have dropped down within a few months. Metals and transport-related products are not in Demand anymore, due to lockdown. Though in all these suffering only FMCG industries are the ones that can generate the money, as they are selling the necessities of lives.

This situation of the stock market shows us how this virus and the lockdown of countries has affected the economy globally.

This pandemic has collapse the economy of many countries especially those which are developing countries as in the states of the third world. However, countries with a strong economy like China, UK, USA, etc. is on the edge to collapse.

This graph, published in the article of “BBC”, shows us the effect of coronavirus on the economy since its eruption:

The estimated growth of the International economy, according to IMF is at -3% this year, which is obviously indicating a worse situation of the finance.

The GDP rate of every country whether it’s the biggest economy of the world or of a developing country has been hit badly by this pandemic. China’s GDP stepped down to 36.6% at the start of the year, don’t know what is coming next for them, whereas South Korea’s dropped down to 5.5%. However, South Korea is one of those countries who didn’t execute, the policy of WHO of, lockdown but have done the aggressive testing and quarantining properly.

COVID impact on the unemployment rate: Within a week millions and trillions of people become unemployed. Lots of people are facing the cut down in their incomes. Unemployment and poverty rate is increasing day by day due to this crisis in every country.

In the United States unemployment rate has hit the 10.4 percent which according to IMF, “signaling an end to a decade of expansion for one of the world’s largest economies.”

Many people have also been put on the job holding strategy of Government by their industries which got completely shut down due to this lockdown policy, such as tourism. Nevertheless, the data on unemployment and poverty varies between the countries, as each and every country of the world is going through the same situation.

But as time passes there is a “light of hope” which has started blinking as many countries have eased their lockdown due to the control of cases in their country. Such as China, New Zealand, Australia, France, and many other countries have started some of their industries to generate the money in order to make their economic growth and better and to end the unemployment from their countries.

Steps to take in order to minimize the loss: The Managing Director of the International Monetary Fund, Kristalina Georgieva, has released her press in which she has suggested four things which should be done in order to fight against coronavirus. Firstly, follow the SOPs properly and support your health care system. Secondly, financial sectors have also followed the SOPs provided by WHO. Thirdly, reduce the stress on your finance. Fourthly, should adopt the policies very wisely in order to minimize the effects of the crisis on the economy.

Considering the seriousness of the situation all the nations of the world should co-operate with their govt. so that they can fight this virus safely. We should behave maturely in these hard times and help those who are in dire need.