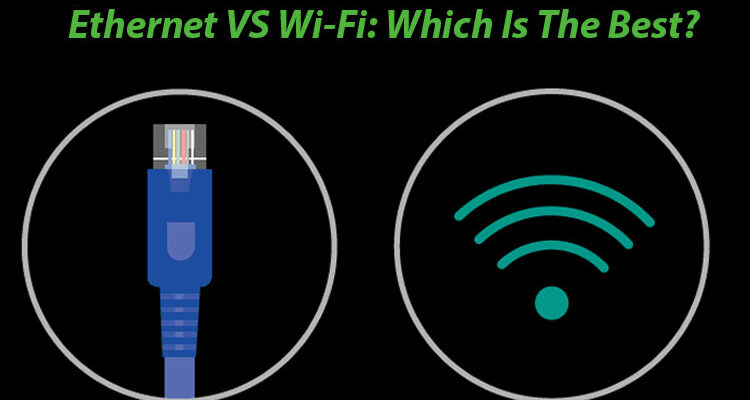 The entire world runs on the pinnacle of technology and communication at present. The Internet has made the world a much smaller place and has paved the way for the access of several commodities that were not available previously. Therefore, the availability of a stable Internet connection is one of the essential requisites in current times. There are multiple methods to obtain a network connection.

Wi-Fi and Ethernet are two of the top-most connection options that most users prefer to choose for their Internet connection. However, there is always a constant, on-going debate as to which is the better option amongst the two. Therefore, let us look at the differences between the two options and perform a thorough comparison between the features of both Wi-Fi and Ethernet to come to a conclusion as to which is the more preferred choice.

Wi-Fi stands for ‘Wireless Fidelity,’ which is basically a wireless network protocol connection that was established in 1999. According to a recent study, more than 3.5 billion Wi-Fi-supported devices are distributed throughout the world annually. Wi-Fi generally works the most effectively for line-of-sight use, as it reduces interference between crowded surroundings.

Connecting to Wi-Fi depends upon the SSID and the designated password as per routerlogin.one. Wi-Fi Protected Access (WPA) protects all the information that is transmitted through that particular network. QR codes can also be scanned to connect the network to various devices directly.

Ethernet is a type of network connection that makes use of wired connections to provide Internet. It was launched in 1980 and comprised local, metropolitan, and wide area networks (LAN, MAN & WAN). Fiber optics and twisted-pair links are used primarily to create connections. Data is generally divided into smaller parts called frames that have source details and addresses of destinations. The entire system is made up of Ethernet cables, modems, routers, crossover cables, and so on.

What Should You Go For Wi-Fi Or Ethernet?

Both Wi-Fi and Ethernet have their own perks. However, they specialize in different areas of requirements, and choosing the best connection between the two is entirely dependent on the user’s needs and preferences.

Most devices are compatible with Wi-Fi, unlike Ethernet, which does not support many devices. For example, laptops require a dongle, and it can become tiresome as the factor of comfort is compromised. Very few devices are devised with the wire-only feature, and hence Wi-Fi will be compatible with most of them.

Wi-Fi can be set up and maneuvered more easily while compared to Ethernet. Router networks can be set up and managed efficiently with particular applications that are specifically available for this exact purpose. The fact that Ethernet requires several cables and wired setups is well known, and those who wish to avoid this process can opt for Wi-Fi.

In case you want to keep moving around the connected area with devices like mobile phones and tablets, you will require a wireless connection. Wi-Fi offers the best solution for this situation. If your only device is a desktop computer or a laptop, you need not worry about this criterion.

Since it is a wired connection, hackers and data stealers will have to manually connect to the network source, making it a risky situation for them, thereby reducing the chances of attack. On the other hand, Wi-Fi is more vulnerable in this aspect as it transmits the Internet over the air, and a wireless network can be breached in an easier manner than a wired network.

A wired connection will always have the upper hand if speed is the deciding factor. Generally, Ethernet cables can transmit up to 40Gbps effectively, whereas the average speed of Wi-Fi is 9.6Gbps. As a result, the ping count, also known as the latency, is lower in Ethernet connection, which is more preferred than the higher ping rate of Wi-Fi.

Ethernet has a facility that is called Power over Ethernet (PoE), which is used to transmit electricity to other devices. Electrical outlets can be reused for other purposes as this feature can prove to be quite handy. For example, Ethernet can transmit power to a camera that is installed nearby and cut down the need for a different power source.

The choice between both these options will mainly get narrowed down to two factors, namely speed, and convenience. Ethernet wins over in the department of speed and quality, whereas Wi-fi is the more convenient and easy-to-use option. Also, data does not have to be encrypted in Ethernet as it is entirely secure, whereas encryption becomes necessary over Wi-Fi. Therefore, it is advisable to go for an Ethernet connection only if you are completely sure that you will effectively tap into all of its benefits. Else, it is just overkill, and Wi-Fi will be the better choice for you.

For simple home usage purposes, one should go with Wi-Fi as it is less complicated and does the job efficiently. On the other hand, if you are a gamer and require a solid, uninterrupted connection regularly, Ethernet should be your pick. Both the connections will work just as well if your primary needs are watching streaming platforms, using social media, checking emails, and other basic uses. Hence, picking the option that suits you best depends on a multitude of factors, the major one being your requirements and modes of use.


Warning: file_get_contents(index.php): failed to open stream: No such file or directory in /home/umerashraf/public_html/tecwic.com/wp-includes/plugin.php on line 441